Today I am drinking Long Jing (Dragonwell) green tea from two different vendors. I have Teavivre’s “Organic Superfine” Long Jing and Life in Teacup’s “Da Fo” Long Jing.  I’ll go ahead and say from the start that these two Long Jings are not in the same price tier which should be considered if comparing them.   The Teavivre Oraganic Superfine version is $13.90/50g and the Life in Teacup Da Fo is $22/50g.    Teavivre does offer several other versions at various price points, including one called “Organic Nonpareil Ming Qian” which is $21.90/50g which might be a better comparison since it was harvested in late March like the Da Fo.  Teavivre’s highest priced Long Jing is their “Organic Nonpareil She Qian” which is $34/50g.   Likewise, Life in Teacup has a premium version called “Shi Feng” priced at $56/50g.

Here are these two teas at a glance: 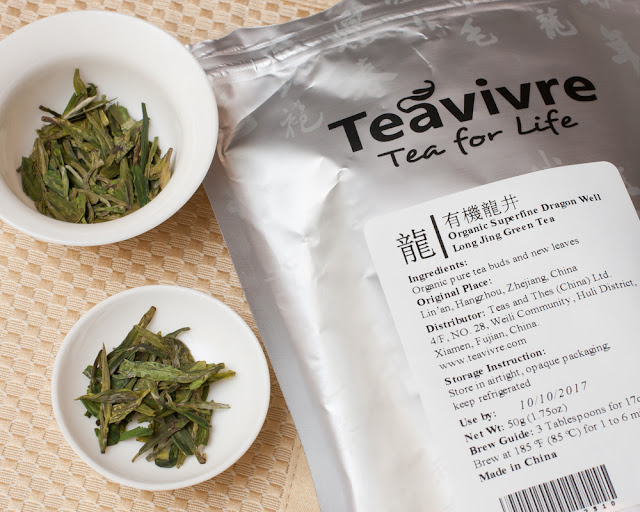 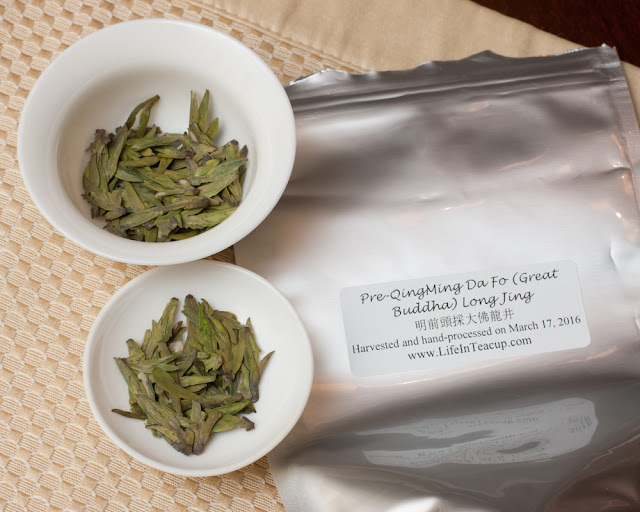 A look at the dry leaf shows that the Life in Teacup Da Fo Long Jing leaves have a more uniform and smaller appearance than the Organic Superfine Long Jing.  The Organic Superfine leaf is a darker green.  Both teas have a good amount of "fuzz" which is common with younger buds and early harvests.  The aroma of the leaves is slightly different.  Organic Superfine is nuttier than the Da Fo leaves which have a lighter and slightly floral aroma.

After hydrating the leaves with the first infusion, the wet leaf aroma is quite different between the two.  The Organic Superfine from Teavivre has a umami seawater aroma, and the Life in Teacup Da Fo has a distinct asparagus with black pepper aroma.  The liquor of the Da Fo is slightly lighter in color, but both are very pale yellow.

The flavor of these two Long Jing teas is pretty different.  The Teavivre Superfine Organic starts out nutty with a good dose of umami and a nice perfumy aftertaste.  It is a very strong flavor despite such a light looking liquor.  By the third infusion I noticed some grassy notes as well.

The Life in Teacup Da Fo flavor was much lighter, slightly buttery, and had a hint of a green bean taste.  Throughout the infusions I noticed a very interesting peppery flavor.  Umami is present, but balanced with some floral notes and a good sweetness at first which gives way to stronger umami in the later (fourth) infusion.

The hydrated leaves again show more variance in the Organic Superfine leaf shape/size where as the Da Fo has smaller leaves that are more uniform.  A lot of this difference is due to both the cultivar difference and also the earlier harvest time of the Da Fo.  These difference are also likely responsible for differences in the flavor.


Both of these teas work well brewed straight in a glass "grandpa" style.  Due to the strength of the Organic Superfine, it's better to error on the side of less leaf than too much or expect the first few sips to possibly be bitter.  The later additions of water will show a nicer balance and the strength of these leaves help it last a long time when brewed this way.  Interestingly this method did not give me the umami flavors as much, but the nutty flavors were still there.  I actually bought the Teavivre Organic Superfine Long Jing for the purpose of drinking this way.

It is not my goal to say that one of these is better than the other.  I find that each one has strengths and weakness, and I would be in the mood for each one at different times.  The Da Fo is a much more delicate brew that can be appreciated more in a more focused session, and the Organic Superfine was capable of producing a nice bold full flavored green tea experience.


Link to Teavivre Organic Superfine Long Jing: http://www.teavivre.com/organic-long-jing-green-tea/
Link to Life in Teacup: http://www.lifeinteacup.com/
Posted by Microshrimp at 9:00 AM