For most of my tea reviews I use a white teacup, or sometimes clear glass.  If I'm drinking tea alone I use one of my cups that are the same volume as my brewing vessels so I can just pour my brews directly into the cup without using a cha hai.  A white teacup is perfect for showing the color of the tea liquor, and if you don't use a strainer and get some small leaf pieces in the cup you can easily judge the clarity of the liquor.

However, none of these white cups are my favorite teacup.  My favorite teacup doesn't end up in photos very often because it's one I use when I'm simply drinking tea for myself, for pure enjoyment.  So I decided that my favorite cup itself deserves to be in the spotlight today. 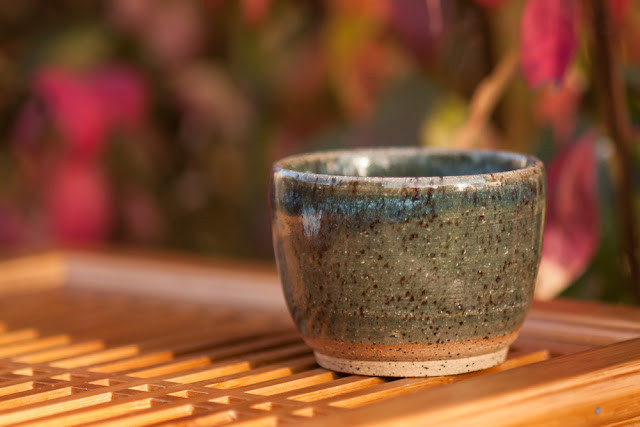 This cup came from an American artist who sells teaware on his Etsy store "NoirDragon."  One interesting thing about NoirDragon is that his path to producing beautiful ceramic teaware is completely rooted in his passion for tea.  His passion for tea naturally lead him to appreciate and collect teaware, and then eventually he decided to learn more about the art of pottery so that he could create his own teaware.  And now he is sharing his creations with fellow tea lovers.


The quality of my NoirDragon cup shows very precise craftsmanship and attention to detail.  I can turn this cup over and set it on a flat surface and the rim is perfectly even and the base is perfectly level.  I discovered this by chance while trying to photograph the bottom of the cup and was very impressed with the geometric perfection. 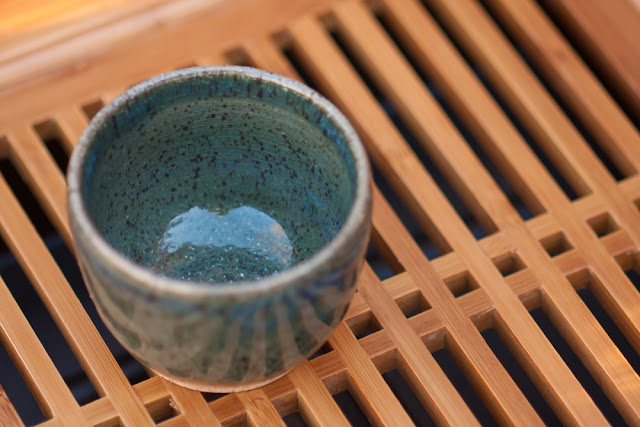 I'm really happy with the glaze/color of this cup.  The inside has a slight blue hue to it, and the outside has a bit more green.  I used to say that I don't have a favorite color because all colors can be great depending on context, but despite that, I do admit that I tend to gravitate toward green, and I absolutely love the color of this cup.

At first I assumed that the speckled pattern on this cup was due to the glaze used, but when I asked the artist about it, NoirDragon told me that the speckles are actually due to manganese granules in the clay itself that produce this beautiful pattern through the glaze when fired in the kiln.  If white glaze is applied to this clay, it will show up as little brown speckles on the white glaze which also has an interesting effect.

This has easily become my favorite cup for more than just the appearance and craftsmanship as it functions very well for my typical personal tea brewing sessions.  True, it doesn't have a white interior so it doesn't show off the tea liquor, but adding a glass cha hai would take care of that if needed.  I really love this cup though because it is the perfect volume for holding the contents of an 80ml gaiwan.  The 80ml gaiwan is the brewing vessel I use about 85% of the time I brew tea, and I can pour directly into this cup and it fills it to the top.  The clay is thick enough to keep my hands from getting too hot, and once preheated, that thickness holds in heat well to keep the tea warm as I sip.  The size, shape, and weight of the cup feels perfect and natural in the hand.  Drinking from this cup allows me to have a better connection with the tea and I'm able to enjoy the tea without being distracted by an uncomfortable or awkward cup. 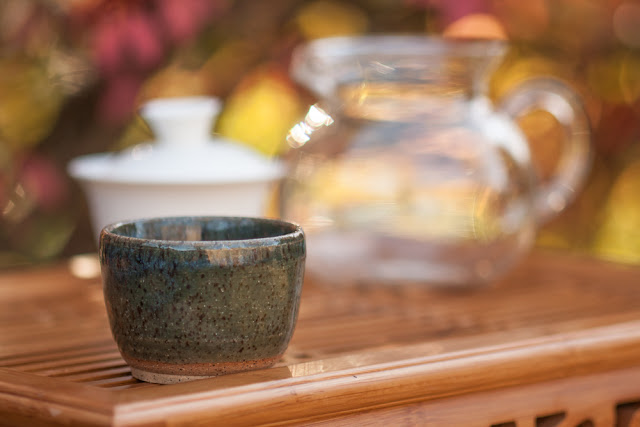 NoirDragon's creations are continually evolving, and I really look forward to seeing what he comes up with next.  Through recent conversations I have learned that he often tries out new glazes and clays.  He has some pieces that have a crackle glaze, and a few that have a really interesting highly textured "crawl glaze" that look like they were crafted directly from parched earth.  I have also heard that he is experimenting with brewing vessel designs such as shiboridashis and possibly gaiwans, and I think he may even be trying out some tea pet designs!

So you may not see this cup make an appearance too often in my tea reviews, but if you stop by when I'm having an enjoyable tea session with my favorite teas, there's a real good chance that I'll be sipping from my favorite teacup.

Link to NoirDragon on Etsy: https://www.etsy.com/shop/NoirDragon
Posted by Microshrimp at 11:16 PM 1 comment:

When White2Tea first shared a teaser image of the mao cha they were using for an upcoming sheng cake, I was quite confused by the apparent nei fei in the image.  The nei fei (a small inner label pressed into a puerh cake) had a reddish blob that appeared to be a pair of lips. But knowing that this is White2Tea, which never fails to amaze me with their unique style and creativity, I decided that this was probably not an optical illusion, and it was best to just accepted the high probability that I actually was seeing a mouth and hope the meaning of that would be clear later on.

I later learned that this new cake is named Pin, and the outer wrapper has not one but three colored blobs that are, without a doubt now, mouths.  I'm sure anyone with a good understanding of Chinese probably got a chuckle out of this, but the rest of us need some explanation from TwoDog.

According to TwoDog, the Chinese word for "mouth" is "kou" and represented by the chinese radical 口.  If you have three of these radicals in a triangle configuration, you get 品, the word "pin."  The word "pin" is Chinese for "to savor" and he further explains that it could be applied to a drink, such as tea, to mean, "drinking with intent." Further he explains that the phrase "pin cha" (品茶) "literally means 'to taste tea.'"  This wrapper has even deeper meaning than that though.  The triangle theme is also represented in the red/pink background which is actually a triangle when the wrapper is unfolded.  The three mouths or three points/sides/angles of the triangle represent the tea material used to make Pin, which is a blend of Lincang material from 2013, 2014, and 2015.

The 200g cake as a whole shows a beautiful mosaic of colors.  This is partially due to the fuzzy white buds mixed with the fuller leaves, but is also likely a result of the blended material of different ages.  The older material was stored by TwoDog in Menghai to mellow out a bit in contrast to the young 2015 material.  The compression is a good "medium" -- not so loose that it can be pulled apart by hand, but loose enough that a tea pick can separate it without doing too much damage.

I wasn't entirely sure the best way to brew this tea and I'm still experimenting, but so far I have been using water around 200 degrees F which I sometimes use for younger raw puerh.  Of course this one also has components from 2014 and 2013, so going with water right off a boil might not be too risky.  I have stuck with my usual 5g per 80ml gaiwan for now and started my first few infusions around three to five seconds or so.

Maybe it’s because I just got over a mild cold and can breathe better today than any day this past week, but the wet leaf aroma of this tea is very strong, and although it does have a “young raw puerh” aroma, it seems much deeper than some, likely due to the older material also used.  Imagine autumn leaves coated in dark honey-- that may sound strange, but an aroma like that in a tea is amazing.

The honey colored clear liquor is very viscous and has a thick mouthfeel-- it is one of those teas that you almost feel the need to chew while drinking it.  The sides of the tongue feel some mild astringency at first, and then a couple minutes later the entire mouth feels a subtle tingly sensation.  It's suiting that a tea with three mouths on the wrapper would have such an active mouthfeel.

The overall taste of Pin is very well balanced.  It has a general herb-like flavor similar to oregano accompanied by grassy and hay notes, and early on it also has a hint of clean smoke which seems to fade in the middle and late infusions.  After the first three or so infusions the flavors become even more balanced and stay very consistent with each subsequent infusion.  These middle infusions bring out a pleasant sweetness that contrasts well with the young sheng bitter bite.  This is again one of those teas where I lost count of how many infusions I got out of it, but my 1.7L electric kettle was giving me a "Low H2O" warning before I was finished.   Well balanced flavors and many consistent infusions seems to be a great indicator of high quality material.

Beyond the taste is a wonderful aftertaste which further indicates the high quality of material used to make Pin.  The aftertaste first retains the hint of smoke and herbal characteristics found earlier, but then blossoms into a nice tea perfume hui gan that lingers in the mouth for several minutes.  I should also mention that the cha qi from this tea was quite noticeable when I drank it.  This is certainly a great tea to drink with intent and savor, and I'm very curious to see how this one will taste many years down the road.

Pin was released in November to celebrate the one-year anniversary of the White2Tea monthly tea club, but is also for sale in the White2Tea 2015 raw puerh lineup; sample sizes also available.  More details can be found here: http://www.white2tea.com/tea-shop/2015-pin/
Posted by Microshrimp at 10:39 PM 1 comment: