I am still alive!  Unlike this time last year, I have no real dramatic reason for not posting in a while, just a combination of holidays, vacation/travel, being distracted, mild illness, and sporadic water quality crisis which I might write about later.  (Water has a huge impact on how tea tastes, and if your water tastes funny, any tea made with it might also taste funny.)

I had not planned on writing anything in particular at this time, but the February White2Tea club package was so different that I was eager to try one of the teas right away. 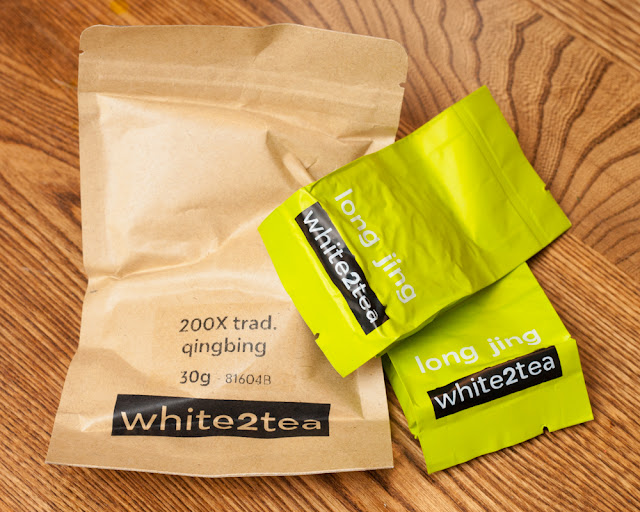 As someone who loves humid stored puerh and has almost always enjoyed White2Tea's puerh selections, the company's specialty, I would typically be most excited to try the early 2000's traditional stored qingbing; however, I was VERY surprised to see two packets of Long Jing, and this is what I rushed to try first.   At the time of writing this I have yet to even open the qingbing sample (but I'm craving it now).

This is White2Tea's first time offering a green tea.  I had some initial thoughts when I saw that the box contained Long Jing.  My tastes and preferences align very well with White2Tea's puerh offerings, and when it comes to their non-puerh offerings, I generally enjoy those other teas but can see that some of them, such as the Hot and Heavy yancha or "Hot Brandy" black/white tea, which I found just OK, are not their strongest products.  My initial expectation for the Long Jing was that it's probably not wonderful, but would be "pretty good."

The club newsletter was a little confusing though.  The exact wording is, "Spring 2016 - This is our favorite version of the classic green tea long jing, which translates as "dragon well", from the Zhejiang province.  We will be selling this version, as well as a higher end bud heavy version in spring of 2017."  The news letter also says, "In 2017 Spring we will be offering a limited pre-order of this green tea, directly after production.  The pre-order will be first come first serve, and pre-order only (it will not be available on the site for purchase..."    I am not exactly sure how to interpret this and can't tell exactly what will be fore sale in the spring and what won't be for sale or what will be pre-order only.   But the part about the alternative "higher end bud heavy version" makes it pretty clear that this version here in the club is probably a later season harvest. 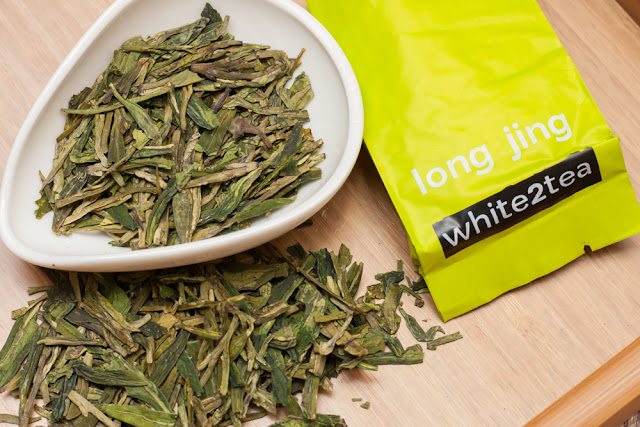 Upon looking at the dry leaf, it is more obvious that this is not a bud heavy version and is likely from a later harvest of the season.  The dry leaf shows a lot of variation in size, shape, and color.  I also do not see an abundance of tea fuzz on the leaves or any fuzz balls in the package.  The aroma is nice though and has a good nutty smell.

I decided to brew this in a 100ml gaiwan using about 5g and water in the 175-180F range.  My first infusion was about 15 seconds.  These are the parameters that White2Tea suggested, though there is enough tea in the club box to experiment with other parameters later (about 20g total).

Like the dry leaf aroma, the wet leaf aroma is also nice.  The nutty characteristic is there as well as some sweetness, and it has a good green tea "salt water aroma."  I'm not sure if this is a common way to describe green tea, but the salt water scent is a pleasant aroma that I find in some Chinese green teas.  Probably a more appropriate term would be "umami."  The aroma is not grassy or bitter.

The pale yellow liquor is lightly dotted with tea leaf trichomes (tea fuzz) and has a very soft mouthfeel during the first two infusions.  The first two infusions also had a very good creaminess and nuttieness in the flavor.  The "salt water" characteristic in the flavor also reminds me of "marine air" or fresh air at the beach with a hint of seaweed.  This is a good thing and again is probably considered umami.

I did my third infusion slightly too long though and some bitterness overtook the creaminess and nutty sweetness.  This slightly over brewed infusion became grassy and slightly astringent which also showed up in the aftertaste.

I was more careful with infusions 4 and 5 and was able to get the tea to return to a more pleasant brew.  These lighter infusions had less nuttiness and creaminess but instead had a crisp citrus taste, and a nice smooth feeling replaced the previous steep's astringency.  The citrus notes came through in the aftertaste for a refreshing finish. 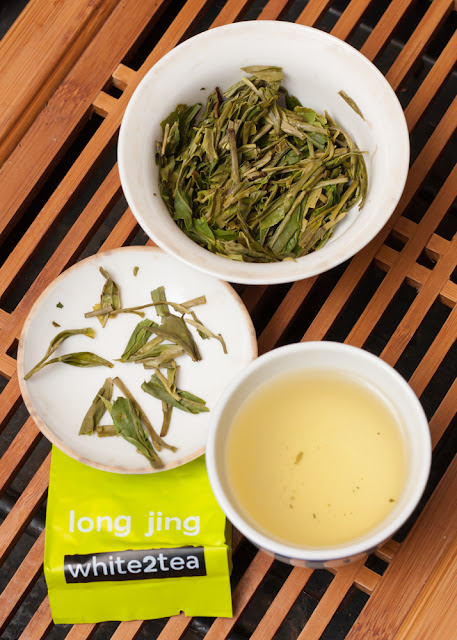 Examination of the wet leaf confirms that the size and shape of this particular batch is quite varying and quite rough.  It would be very interesting to compare this to the "bud heavy version" which I assume would involve earlier harvest and more careful picking.  Although this current batch is pretty rough, I was happy that the taste was not overly grassy or burnt, especially when brewed with a light hand as it can become grassy and bitter with steep times too long.

We do not know the price of this tea yet.  I enjoyed the tea, but not enough that I would want to stock up on it unless the price were to be comparable or lower than some other green tea vendors I have tried in the past, such as Teavivre.  However, I am curious about the "bud heavy version" and the "pre-order" version which I assume will be bud heavy as well (maybe they are the same thing?  I'm still confused by the newsletter wording).  For sure though the pre-order version will be about as fresh as you can get, minus the time it will take for shipping.  With green tea, freshness is important and I wonder if this 2016 long jing may have been a bit more vibrant nearly a year ago.  If I do another Life in Teacup Long Jing pre-order this year, it would be nice to compare to the upcoming White2Green pre-order.

So overall this was a strange offering from White2Tea and a welcome experience.  Green tea is not their specialty, but it's nice to offer a little bit of everything, and long jing is a classic tea that I enjoy from time to time.  This long jing won't win any awards, but it's not bad at all.  Based on my first session with it, I would be happy to share this with someone who wants to try long jing for the first time or to have some on hand to sip on in the summer, assuming it will be priced mid range as well.


Link to White2Tea: http://white2tea.com/
Posted by Microshrimp at 8:45 AM